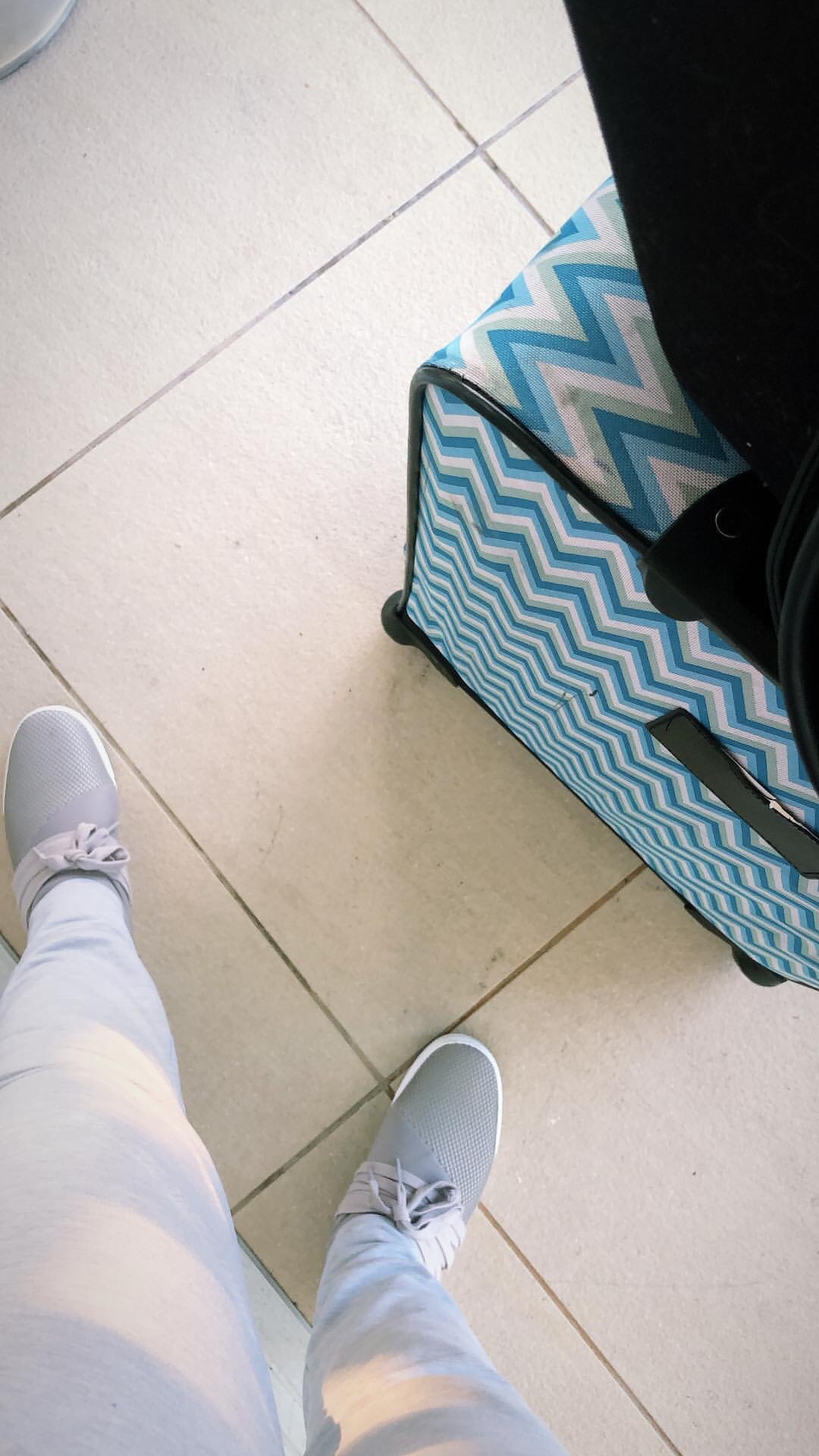 So you are going to travel with or without baby, but you are still pumping. If you are traveling without your baby, first, let me say WAY TO GO! As a new mom, who recently traveled by myself without baby, I know how tough it can be! You have to deal with the unnecessary guilt of leaving your baby, whether it is with your oh so loving husband, or a wonderful friend or family member. If you are traveling WITH your baby, YOU CAN DO IT! It can be tough and sometimes you may miss out on some things, but it is worth it! I have traveled several times with my daughter since she was born, so I would not say I am an expert but I have some great tips for you!

It is important to know that there is a slight difference when traveling in a car and on a plane. It is a little easier to travel in a car while pumping, if you are a passenger. If you are driving alone it can be a little more difficult. I haven’t traveled on a train but if you have let me know if there is anything moms should know!

Traveling by car while pumping

When you are traveling by car while pumping there are somethings that you will need:

It is very important that you stick to the same feeding schedule your baby is on when you travel. This will help maintain you supply, my baby feeds every four hours during the day, so I pumped every four hours. If you are driving alone, it may be a good idea to map out places to stop before hitting the road. Unfortunately, there is a strong chance that you will have to pump sitting in your car, in a parking lot. Unless you are comfortable pumping in a public restroom. When I traveled with my family, we would stop at a rest stop and I would feed the baby, and then I would pump while my husband was driving. Then I stored the milk in the cooler until we got to our destination.

There is no law that states that hotels HAVE to provide breastfeeding mothers with a refrigerator or a freezer. However, most hotels are super accommodating and if there is not a fridge in the room, they will offer one with no extra cost. It is important to ask before making reservations.

Traveling by plane while pumping

When you travel by plane while pumping, you pretty much need the same things you need while driving.

When I recently flew down to Orlando, I made sure that I researched the rules and regulations of traveling with a pump and breast milk. What I discovered is that every airline allows breastfeeding mothers to bring their pump on as a carry on. However, it’s not an addition to the carry on you’re allowed, it is your personal or carry on item. Your pump bag will have to go through security, and if you have milk, they have the right to test it. Moms are allowed to have as much milk in their bag, it does not have to follow the 3 oz rule. Just let the TSA worker know you have a pump and milk.

Once you make it to the gate, depending on your pumping schedule, it is possible you may have to pump. There are a number of airports that have mother pods, they look like pop up nursing rooms. Those rooms are awesome and allow mothers to get comfortable and relax while feeding or pumping. However, some don’t and you will have to either pump at the gate, or in the bathroom. At the RDU airport, I had to stand in the bathroom and pump at the sink. Which didn’t bother me to much, but it was not relaxing to have to listen to other people use the bathroom for fifteen minutes.

Depending on the airline and flight you are on, there may be a plug by your seat. So if you have a long flight, you might have to pump while in the air. You can usually just pump in your seat, but again just let your flight attendant know and they can help you. The pumping bag I bought on Amazon (linked below) has a cooler on the bottom, so it was easy to store the milk until I got to where I was going.

HAPPY TRAVELING MOMMA! I hope you find these tips helpful for your next trip! I would love to hear where you guys are going. If you have any other tips for traveling moms, let us know in the comments! 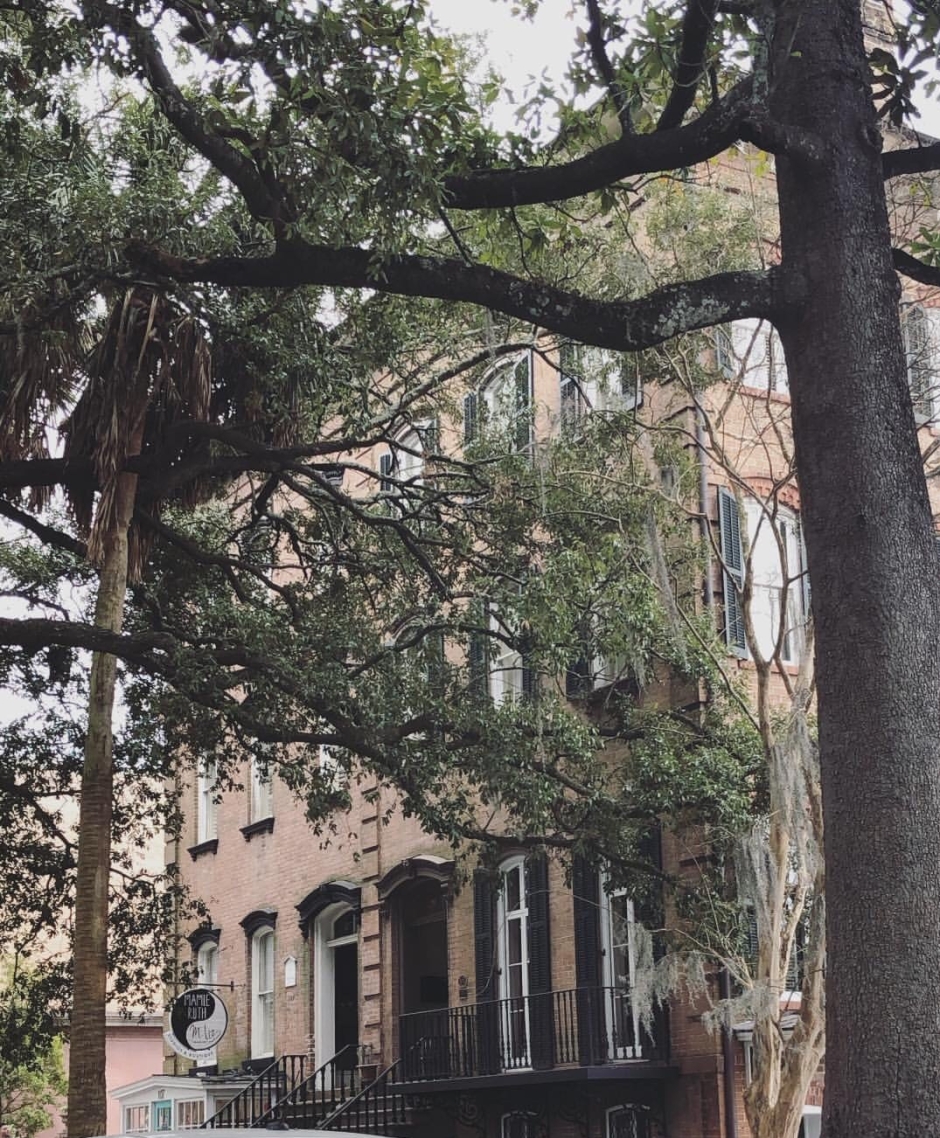 If you are considering taking a trip to Savannah, Georgia, I highly recommend going during the “off” season! February was the perfect time to take a quick weekend trip to the “Hostess City of the South.” The forecast called for rain, but thankfully it ended up being sixty and sunny. And because it was not a high travel time, it was not crowded at all! There were still groups of travelers, especially bridal parties, but they were few and far between. Seriously though, if you can visit Savannah during the off season. DO IT, you won’t regret it!

Since we just went for a short weekend, we got an Air BnB just outside of Savannah in a town called Richmond Hill. It ended up being a pretty basic hotel room, BUT it allowed dogs which was perfect because we brought our dog, Foster with us. Also, I should mention that Savannah is REALLY dog friendly, Every restaurant we ate at brought a dog bowl of water out for him, which was so accommodating! SO many people asked to pet Foster, and Foster loved meeting and playing with all of the other dogs. If you have a dog Savannah is the perfect place to bring them along. 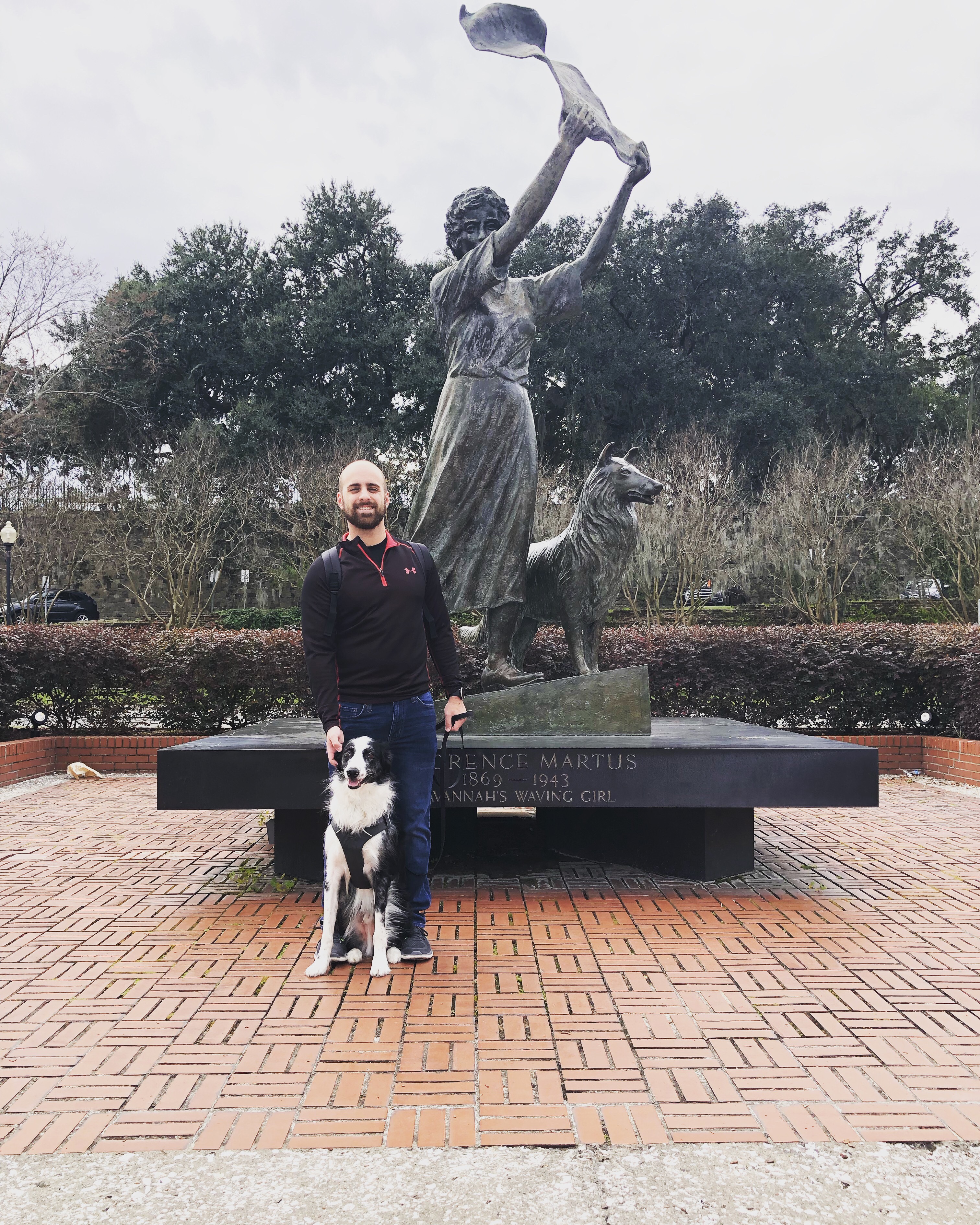 We really only spent one day in Savannah, but we got to see some beautiful houses, and landmarks, we also ate some DELICIOUS food! Let me back up and start from the beginning. When we first got into Savannah, around noon, the first thing I wanted to see was the River Street Markets. My FAVORITE thing about River Street was the cobble stone streets. By the way, flat mules, probably not the proper foot wear for walking blocks at a time! Moving on. We did not really go into any shops, I just wanted to see the sights and take in the beauty and history of Savannah. We stopped at the “Waving Girl” statue to take a picture and read up on some history of the Savannah River.

By this time, Ellie was getting a little hungry, so we stopped for lunch. We decided to eat at Tubby’s Seafood River Street, because they had an outside, pet friendly, patio that overlooked the river. The food was PHENOMENAL, we order Fried Green Tomatoes for an appetizer, Cory ordered a cheeseburger, and I order a Fried Mahi Sandwich with a side of coleslaw. First, I should say that this was not your typical coleslaw, it was homemade. It was light and you could taste the mustard seed, which I loved. Side note: if you order Sweet Tea, they bring you refills for free, Cory drank like eight glasses and took one for the road. If the river view wasn’t entertaining enough, there was a trumpet street performer who would play songs while people walked by, he was HILARIOUS. When the river cruise passed, he started playing “My Heart will Go On” from Titanic, and the whole patio erupted in laughter. 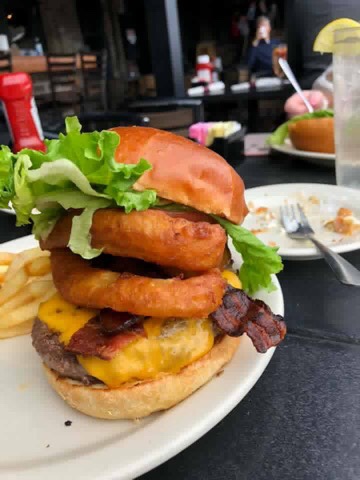 After lunch, since we were feeling pretty full and Elliott was ready for a nap, we decided to drive around a little and look at all of the old houses. I WAS NOT DISAPPOINTED. I love old houses, I like to imagine all of the different families that lived in each house. Each house had a beautifully colored front door, a double patio, and natural gas lanterns by the front door. There was the cutest coffee shop we found on our drive, we didn’t go in but we did snap a picture because it was just too cute. 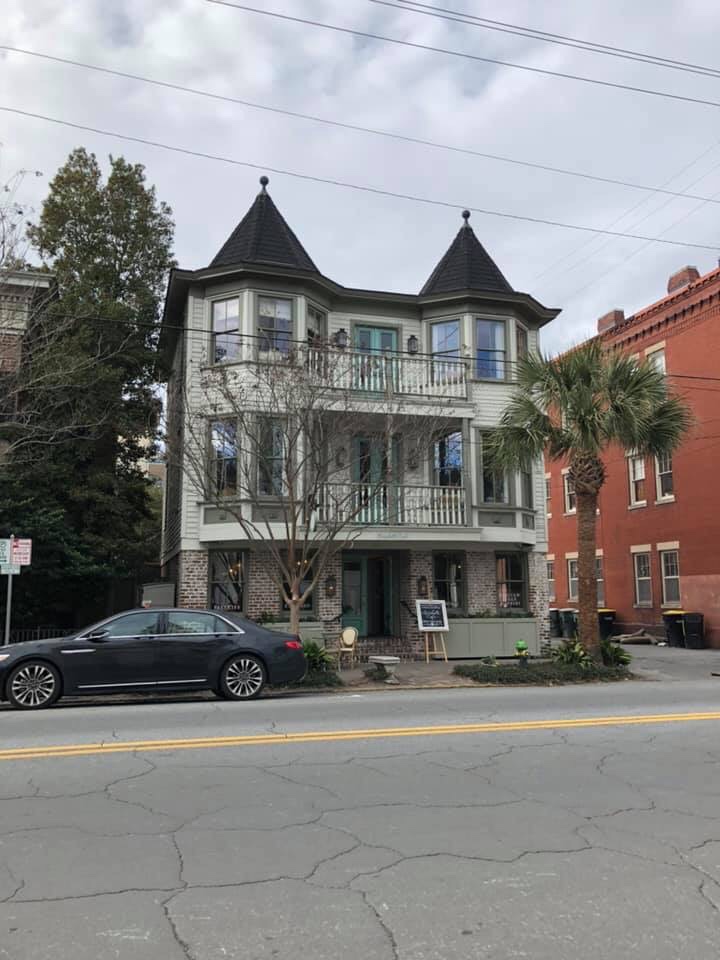 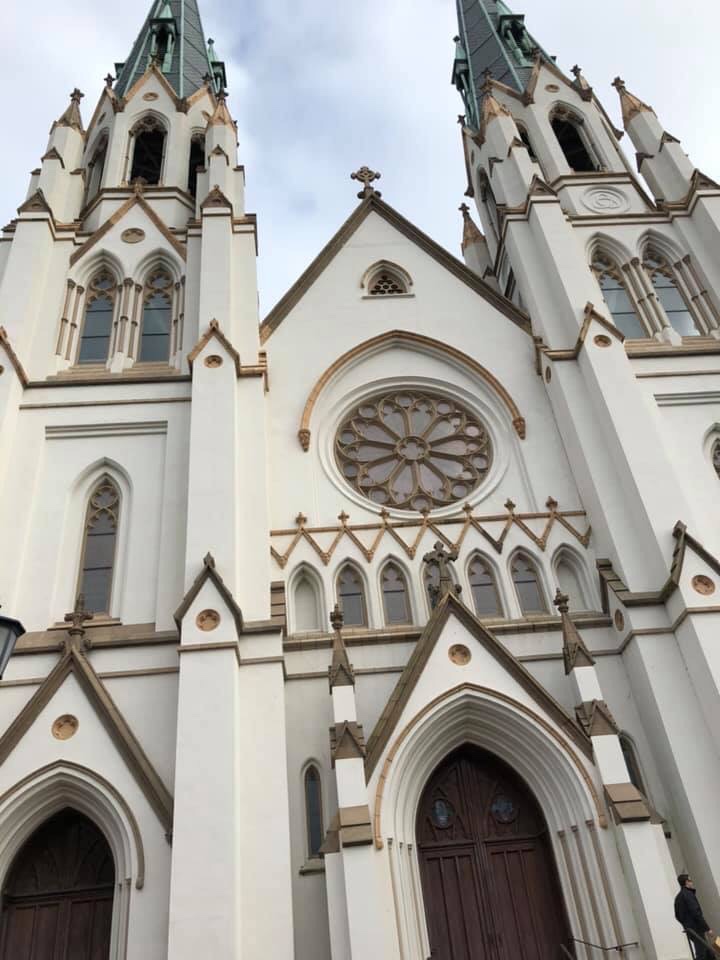 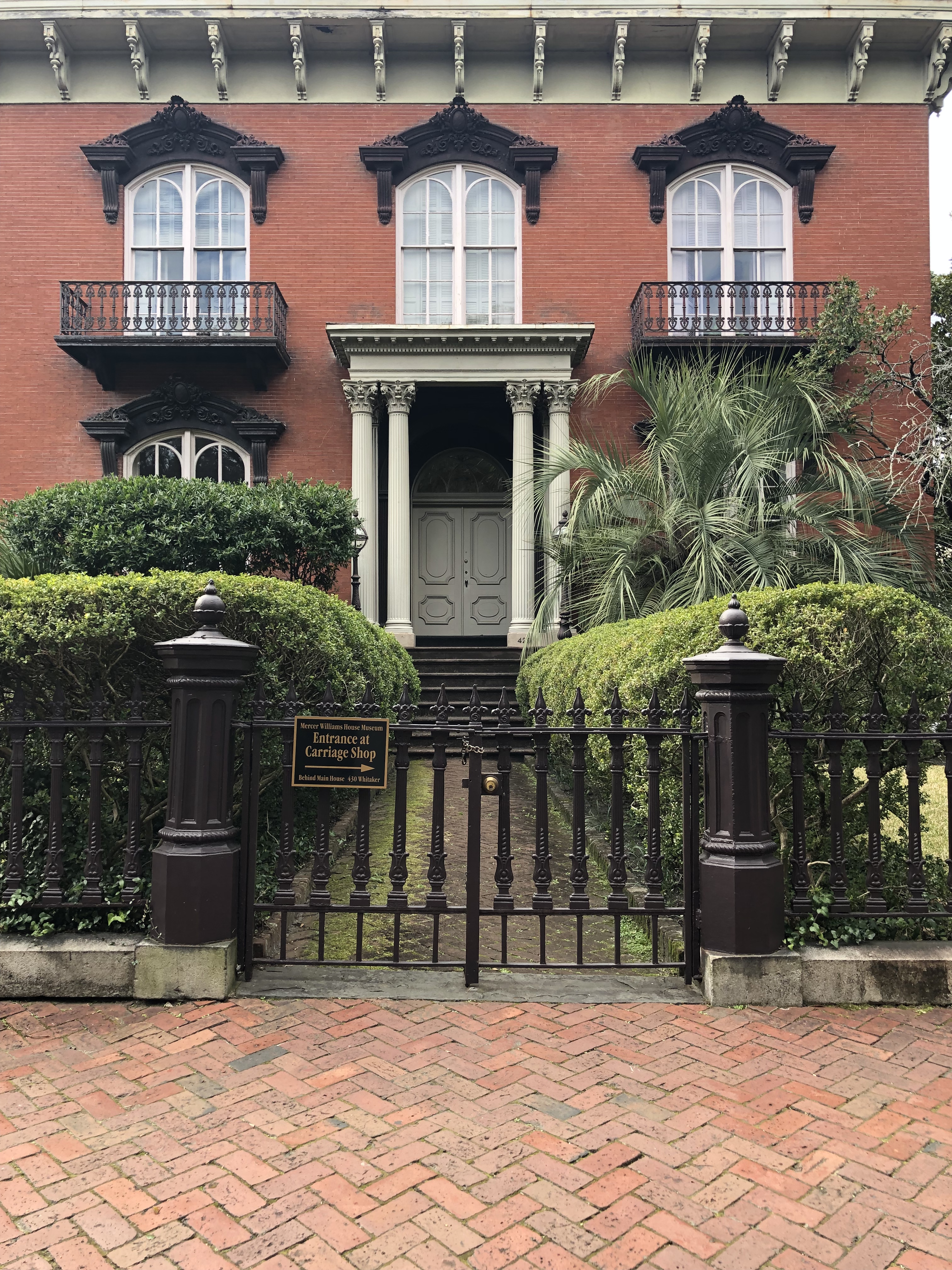 Once we got to Forsyth Park we stopped and took a family stroll. There were not a lot of people, but almost EVERYONE had dog. Foster was in heaven, he met a puppy Australian Shepherd named Blue and two older Corgis who seemed to own the park. After taking a few pictures at the beautiful fountain in the middle of the park, and accidentally photo bombing some wedding pictures, we took a walk up Bull St. in search of some macarons. Thirty minutes ,and two blisters, later we finally arrived at Marche de Macarons! CAN I SAY, YUMMY! I am a macaron fanatic, and I am really picky about them. Marche de Macaron meet all of my expectations, Cory and I got a dozen to share. They did not last more than 24 hours. 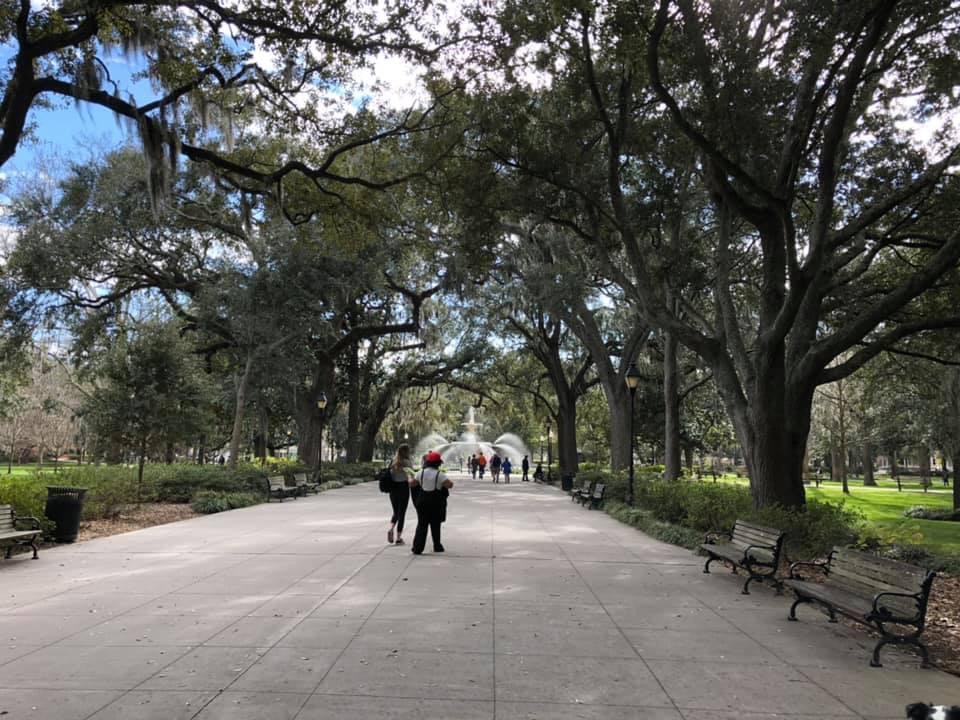 We headed back to the motel to take a quick nap before dinner. We drove back into Savannah for dinner at Moon River Brewing Company, again we had to eat somewhere that was pet friendly. Moon River had a big patio, with heaters for the “colder” months. They even had one of those pictures you put your face in, of Audrey Hepburn and George Peppard from their roles in Breakfast at Tiffany’s, one of my favorite movies! For dinner we split a plate of nachos and three tacodillas. YOU HAVE TO TRY THESE TACODILLAS! They are made with smoked brisket, which I’ve never had and thought I wouldn’t like, I was WRONG. It was so melt in your mouth good! I wish I could have eaten a hundred of them! We sat next to a couple who were celebrating their wedding anniversary, they got married at Moon River just a year earlier. They informed us that Moon River is rumored to be one of the MOST haunted places in Savannah. So if you are into ghosts, this would be a pretty cool place to visit. We will absolutely go back and get more when we visit again.

Sunday morning we hit the road for home, but not before stopping at Peach World, because when in Georgia you have to get peaches. Unfortunately, peaches are not in season until April so instead we got some Peach Moonshine Jelly and Pecan Praline Honey Butter. Both are perfect of toast for a small snack, or for breakfast. There are only two Peach World shops in Savannah but I recommend going and getting some peach goodies!

I hope that you decide to visit Savannah soon, and stop at some of the places we tried. I promise you will not be disappointed. And if you do visit Savannah let me know what you thought and some of your favorite places. I know there are SO many good places we missed, so we will be returning to Savannah in the future!