I recently attended an event put on by the Raleigh Moms Blog, called Bloom. The event is geared towards new and expectant mothers. This is the fourth year in a row that the Bloom event has been held in Raleigh. Wake Med was a partner for the event, so naturally it was held at Wake Med North. The event was amazing and super informative. There were several local vendors in attendance from swim lessons, counseling services, child care, photographers and many more! It was the perfect one stop for any mom looking for local support services. I highly recommend Bloom to any mom who feels overwhelmed, and does not know where to start when preparing for baby.

The event had two main sessions, one of which was a lactation panel. Being a breastfeeding mother, I felt it was appropriate that I sat in and learned more from a local lactation consultant. Sandy Arnold, Certified Lactation Consultant and Dr. Alisha Davis lead the session, as new and expectant moms asked a series of questions regarding breastfeeding. I decided to share these questions with you all, in hopes that any mommas considering breastfeeding ,or who are breastfeeding ,may gain a little insight!

What kind of lactation problems can you experience?

Is it common to have issues with the rooting reflex?

If there is any misalignment in the cervical vertebrae a baby can struggle to turn their head properly  and there maybe issues with the rooting reflex.

Yes! My Brest-friend is the most helpful because it gets closer and  snugger to the body! Often times little babies can get lost in the Boppy pillow. The Boppy is great for when the baby gets older and bigger.

Is there a difference when you introduce solids and a latch?

Oh yea, sometimes babies will hold their tongue back when eating from a spoon. So they will do the same while breast feeding. Therefore struggling to latch properly. Just continue to breast feed and this problem should work itself out.

Is there anything you can do during pregnancy to help milk supply?

Not during pregnancy, no.

You don’t have to change your diet. You want to make sure you are eating and drinking. Oatmeal, granola bars, Kind bars, the “Pink Drink” at Starbucks. Drink half of your body weight in any liquid, water, juice, tea.

At the hospital get all the lactation help you can get. Make sure the latch is right and the baby is gaining weight. Get your rest. STAY OFF GOOGLE (that is my personal advice)

Should you pump at the hospital?

If there are serious issues, yes. But what is more helpful is hand expression. The lactation consultant at the hospital can help teach you how. Most times they will encourage you to continue trying to nurse while at the hospital. Only add pumping if the baby is not nursing well.

Madela Pump In Style (this is the pump that I use)

Spectra S1 and S2, these pumps are hospital grade, and they have a ton of positive reviews from mommas.

Make sure baby is hitting all of the proper milestones. Don’t sit in the house every day, get out. Postpartum anxiety can become worsened if you isolate yourself from others. Make new friends, find a mom tribe. Fit4Mom is a great way to get out of the house, and connect with other moms.

I know that there are a ton more questions that you may have, so feel free to let me know in the comment section, and I will try my best get you an answer! 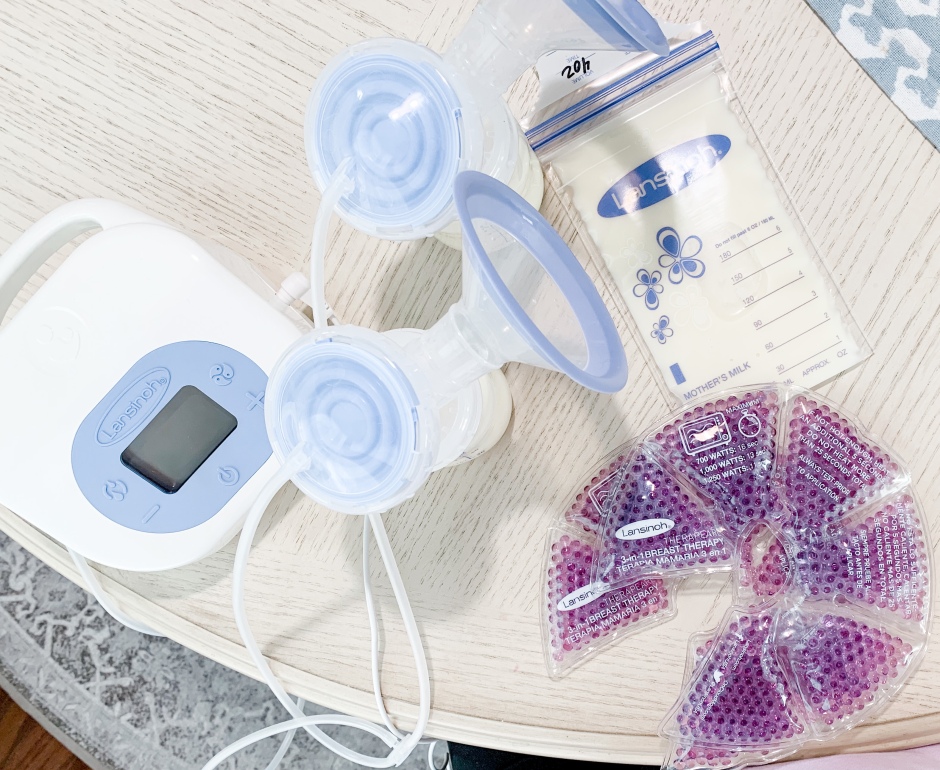 When I found out that I was going to be a mother, I was faced with a thousand and one decisions. Each decision harder than the next. The biggest choice a mother has to make is whether to breastfeed or formula feed. Each choice is 100% valid, and we as a society need to stop shaming mothers who formula feed! Instead, let’s lift each other up, support each mother’s feeding decisions and move on with our lives. Mothering is hard enough, without feeling guilty for each decision you make.


“Each choice is 100% valid, and we as a society need to stop shaming mothers who formula feed! “

There were so many benefits of breast milk, that deciding to breast feed was the easiest choice I made. Even though the decision was easy, actually breastfeeding was not. My mother did not breastfeed, and I did not grow up around babies that were breastfeed, so I was under a very naive belief that it was going to come naturally. I mean isn’t that what society tells a mother, breastfeeding is easy and if it isn’t, you aren’t trying hard enough? First of all, let’s just crush that misconception right here and now, breastfeeding IS HARD. No matter what some mothers do, it just doesn’t happen, and they end up deciding to formula feed. A lot of mothers feel unnecessarily guilty when they decide to quit breast feeding. I am here to tell any mother out there, you are doing great and you are making the right thing for YOUR child!

In my last few months of pregnancy I attended birthing classes, and a Breastfeeding 101 class at the hospital I was delivering at. At that 101 class, the Doula was very adamant that we all try to nurse as soon as our babies were born. So when my daughter, Elliott, was born that is exactly what I did. I was very excited to start nursing and create that bond with Elliott. However, my enthusiasm was met with disappointment. Elliott was unable to latch properly and I had to use a nipple shield in order to help draw out my nipple. For the next two days in the hospital, even with the assistance of the nipple shield, my little one still had trouble latching. The hospital lactation consultant (LC) taught me how to hand express so that I could give my daughter that coveted “liquid gold” or colostrum.


“First of all let’s just crush that misconception right here and now, breastfeeding IS HARD. No matter what some mothers do, it just doesn’t happen, and they end up deciding to formula feed. “

By the time we left the hospital, my daughter had lost more than 10% of her birth weight. We left the hospital on a Friday and had to return to the pediatrician the next day. On our way to the doctor, I realized that my breasts were engorged, which is extremely painful if you have never experienced the feeling. Again, the lactation consultant at the office showed me different ways to position my baby to assist her in latching. She also instructed me to pump when we got home, even though they do not recommend pumping that soon after giving birth. Most LC tell moms to wait until nursing is established before pumping, as to not create nipple confusion in their babies.

This was the first time that I realized how much easier pumping was for me and my daughter. My first pump I got about 4 oz of milk, but my daughter was only drinking 2 oz a feeding. I was shocked that my body was producing so much extra milk. Even though pumping was easier, I stayed determined to nurse. A week went by and latching was still an issue, I was becoming engorged but this time I had developed chapped nipples. I called the pediatrician in a panic because I feared my baby was not getting any milk. The on call nurse reassured me that because she was still going to the bathroom that she was okay, and to continue to work on latching. I went into the doctors the next day to have a weight check, and Elliott was still not gaining weight. Again, I was encouraged to keep on trying to nurse. That night, while trying to feed Elliott, I looked down and she had blood coming out of the corners of her mouth. When I pulled her off the nipple, there was blood pooled in the nipple shield. At that moment I decided to pump and feed her.

The next day I posted in a mommy Facebook group, asking for advice on what to do. Oddly enough, my old sorority advisor, told me that she had the same issues and she EP or Exclusively Pumped. I quickly jumped on the internet to research everything I could about exclusive pumping. There was very little information on the internet, most things I found were other blog posts, or mom chat groups. Most of the things I learned about Exclusive Pumping came from an Instagram account – pump_momma_pump , you have to check them out if you do or are considering EP. After all my research, I made the decision that I was going to exclusively pump, and feeding my baby has never been the same.

So how does exclusive pumping work for me? Well, I bottle feed Elliott from reserved milk I previously pumped. Then once she is done feeding, I pump until I am completely empty. It is very important that I pump each time she feeds, in order to help up build my supply. I put the pumped milk into bottles and store the extra in the fridge. Once I have a large reserve, I freeze the extra. Within a week, my supply has been established, I have six 4 oz bottles in the fridge at all times, and I am building my frozen reserve milk. The great thing about exclusive pumping is that for nightly feeding, my husband is able to feed Elliott while I pump. That way, we’re only up for about half an hour, as opposed to an hour to an hour and a half. It truly makes parenting a 50/50 effort, and we are able to get more sleep than before. I should preface this by saying that out baby girl is a pretty good sleeper during the night, so I would not say that EP made her a better sleeper, but just helped to expedite the midnight feedings. Like most moms, I often worry that my little one is not getting enough milk, but with EP, I am able to measure out each bottle with the proper amount, and I can visually see that Elliott is getting enough milk. Exclusive pumping is what has worked for my family and I am so grateful of the support I have gotten not only from my husband, but our daughter’s pediatrician as well. At first, I thought that the pediatrician would not support my decision, but instead, she told me that she exclusively pumped for her son, and that she will EP for her little one on the way!

So, if you are a mother who is trying to make breastfeeding work, and it is just not happening, consider exclusively pumping. It is a great option if you still want to give your baby the benefits of breast milk! Just make sure you invest in a good breast pump because it is going to be your new best friend for the next several months. Happy Pumping Momma! 🙂

Keep an out for a blog post where I discuss some tips and tricks for Exclusive Pumping mommas, and how exclusive pumping works once I go back to work!